Demagogues in a Time of Mass Deception and Destruction

Pride goes before destruction, And a haughty spirit before a fall.
Proverbs 16:18


The sinking of the Titanic has become a legendary story about the dangers of hubris.

Donald Trump is all about hubris.
His arrogance betrays his end and that of those who have been deceived by him and follow him.
Those who stand with Obama, Trump, Hillary, Sanders are all headed for a fall along with the idol they've chosen to lead and "save/help" them.

If Messiah Jesus is not your only help then you will fall, along with your worthless, lying idol.

That is especially true for Israel, having relied on it's worthless idol, America, and being severely weakened and painfully burned by the false peace 2 state final solution and the Iran failure of their lying idol.
THERE IS NO PEACE FOR ISRAEL COMING BY WAY OF WASHINGTON, only lies and deception.
Will Israel wake up in time and end their idolatry and always ignoring God and trusting in these demagogues of Washington ?

In an increasingly dark time when great wickedness and great corruption abounds, God seeks the humble and repentant hearts, of which there are very few, most are out looking for a mere mortal to feed them sweet little and big lies so they do not have to seek God, repent and change from their wicked ways.
This path will lead to your destruction.

Once again, instead of repenting and returning to the LORD, the majority of Americans have sought out another arrogant demagogue who tells them what they want to hear.

This spells bad news for America's immediate collapse, destruction and end, because like Russia's Putin, even God tires of sending out countless ignored and unheeded warnings.

America's problems stem from sin and wickedness and not one person can stop, change or make America great again, especially when God is in the process of judging and bringing it down to the dust.
Those of you who believe and follow the latest lying, ego driven demagogue are being led to your destruction.

Seek the Lord, All you humble of the earth who have carried out His ordinances;
Seek righteousness, seek humility.
Perhaps you will be hidden In the day of the Lord’s anger.
Zephaniah 2:3

It does not take much to see where this is headed unless you are in serious denial, living in a fantasy bubble of your own making, or following the herd of false, 'feel good' prophets and feeding on their delusions and lies.
Do not be deceived.

The truth is harsh, especially for those in serious rebellion against a Holy God.
Attempting to tame a wild bear instead of leaving it alone is a fools errand and there's a large, noxious crop of blinded fools ruling America today. 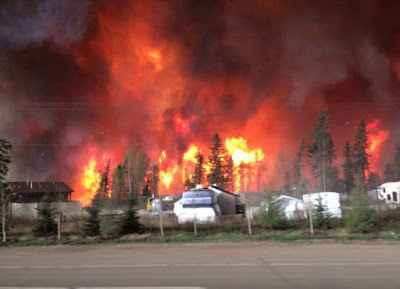 
"It's a nasty, ugly fire and it's not showing any forgiveness."

There comes a time when God's door of forgiveness is shut forever and you are locked out.
Don't play games with God and your immortal soul.
Read Matthew 25

Behold, this was the sin of your sister Sodom: she and her daughters (outlying cities) had arrogance, abundant food, and careless ease, but she did not help the poor and needy.

They were haughty and committed repulsive acts before Me; therefore I removed them when I saw it.


Posted by Marcel Cousineau at 6:27 AM
Email ThisBlogThis!Share to TwitterShare to FacebookShare to Pinterest

Those of you who believe in Trump completely will not like this article, but I'm afraid that it's completely correct.

Even if Trump were EXACTLY as he appears to be, he will still lead America to her doom. As the Bible says... Pride goeth before a fall...

And, our fall will be great, indeed.

Amen and Amen!
Thank you for putting out these warnings.
The LORD GOD is justified when HE+ speaks and clear when HE+ Judges.

Thanks John. My gut tells me that this was God's last test to see if His people would turn to Him in repentance or fall into the boastful, hubris, pride trap. Most have been led away by their American pride, and it shall be humbled to the dust.

anon, praise God, I believe we are that generation, Daniel and the prophets wrote about before Jesus returns.

About that fire in the Alberta province. The forest fires and range fires that hit the western United States last year were no accident. You have unrepented sin, then you have drought and then you have wildfires---and eventually famine.

Yesterday I got a ride from Challis, Idaho to Lolo, Montana with a guy named Brian. He was a Christian and we had some really good fellowship. Brian had just left California a few days before he picked me up. He said that the drought is really bad where he was at in central California. The Lord told Brian to leave California and go to Montana. I told Brian that the drought is only going to get worse in parts of the United States because too many people have turned their backs on God.

Then Brian told me of a dream he had a while back concerning the drought:

In his dream, Brian saw this combine in a corn field where half the field was mowed down. He walked up to this corn stock and looked inside the husk and it was empty. Then he saw these two men with long black hair and beards and they were pulling at their hair and crying out, “Africa, feed us!”

In the last scene of the dream, Brian saw this combine in Africa. The combine was then converted into a war machine. Brian then saw these African troops going to Asia.

In the first part of Brian’s dream, the drought could be literal where people are starving for physical food. Or else it could be a spiritual drought: people are hungry for the Word of God—Jesus Christ, the Bread from Heaven. Maybe the Lord will send more African Christians to the United States to preach to a people that are hungry for God.

Good stuff Marcel...concise and to the point, although I think God already knew His people would fall into the "boastful, hubris, pride trap."

It's always a remnant with God, but a few.

He looks down on His stubborn, proud rebellious creation and saves a few who can only enter His Kingdom humbled by His mighty hand.
The rest (majority) refuse to let go of their religious pride, national pride, self pride, pride of life, and are blinded and destroyed by their own pride that separates them from God forever.

Then the Lord said, “My Spirit shall not strive with man forever, because he also is flesh; nevertheless his days shall be one hundred and twenty years.”

5 Then the Lord saw that the wickedness of man was great on the earth, and that every intent of the thoughts of his heart was only evil continually.

6 The Lord was sorry that He had made man on the earth, and He was grieved in His heart. 7 The Lord said, “I will blot out man whom I have created from the face of the land, from man to animals to creeping things and to birds of the sky; for I am sorry that I have made them.”

But Noah found favor in the eyes of the Lord.

Tim, Thanks for sharing the dream.
Sadly so many Christians in Africa have been poisoned by the American false prosperity gospel preachers.
I know the Lord has His remnant in every place but I sense that the door is closing on America where the gospel was preached more often and in more places than any other place on earth ever since the beginning of time and look what we did with the truth as a nation.
I think America and the backslid Church are finished... except for His remnant.

So because you are lukewarm, and neither hot nor cold, I will spit you out of My mouth.
Because you say, “I am rich, and have become wealthy, and have need of nothing,” and you do not know that you are wretched and miserable and poor and blind and naked

Why does everyone use the same rhetoric to place a label on someone? Same old talk. Put everyone down, but the ones who are responsible for the demise of this world, never say a thing. So somebody comes along and tries to build something out of the destruction , and is called arrogant?
A man stands and says he is a human, and that its self is a true portray of the opposite of a snake. That alone, tells me, a human takes on a snare of snake, don't it? God made man-human...so,
To whom do we think we are, but to point a finger at our selves in error, then judge others in vain? God love you all.

Why does everyone use the same rhetoric to place a label on someone? Same old talk. Put everyone down..
God will put the wicked down. That is the message, that is the warning. They can not stand before God and say;
"We were not warned"

So somebody comes along and tries to build something out of the destruction , and is called arrogant?

Yes, an arrogant fool who does not understand why America is in the process of being destroyed and who thinks he can bypass God's right judgments on a perverted nation that has rejected His blessings.

The fool does not understand that he CAN NOT stop the curse that we have embraced by turning away from a Holy God.

“He reveals mysteries from the darkness
And brings the deep darkness into light.

23 “He makes the nations great, then destroys them;

He enlarges the nations, then leads them away.
“He deprives of intelligence the chiefs of the earth’s people
And makes them wander in a pathless waste.
25 “They grope in darkness with no light,
And He makes them stagger like a drunken man.

Much wisdom and understanding can be found by reading God's word and seeking Him.

It is much better/wiser than following the blind leaders of the blind.