How Close Are We To Damascus Being Destroyed ?

Iran will not retreat from Syria or stop it's Islamic plan to exterminate Israel, and Russia will get even with Israel on behalf of their close friend Syria so there will be war, a very big war.


Syria will attack Israel in such a destructive manner that after, Damascus will no longer exist.


Most of Syria is already rubble, and Damascus is also slated for the ash heap of history.
A prophecy thousands of years old that has yet to be fulfilled, and it looks like that day is approaching.


The oracle concerning Damascus.
“Behold, Damascus is about to be removed from being a city
And will become a fallen ruin.
“The cities of Aroer are forsaken;
They will be for flocks to lie down in,
And there will be no one to frighten them. 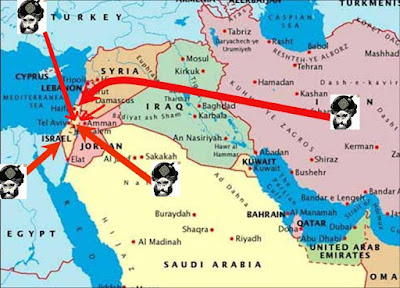 
The nuclear-capable missile can strike Israel even when fired from Iranian territory, raising concerns about an impending conflict between Tehran and the Jewish state that could further inflame the region.

Trump has it wrong, it's not spending $7 trillion, it's wasting $7 trillion.
The only thing the Washington sewer has become very good at.

Trump tweeted early Monday morning, "This will be a big week for Infrastructure. After so stupidly spending $7 trillion in the Middle East, it is now time to start investing in OUR Country!

Trump has become the swamp sewer!

What are we doing in Syria and why is Trump wasting $200m there ?

US pledges $200m in aid to Syria, Tillerson says

Speaking at a meeting in Kuwait of the global coalition against ISIL, the US official said that Washington decided to provide $200 million (Dh734.5m) in aid to stabilise liberated areas in Syria.

After repeatedly threatening to cut aid to countries that voted against the United States over its recognition of Jerusalem as Israel’s capital, US President Donald Trump left foreign assistance to them untouched in his 2019 budget proposal published on Monday.

Posted by Marcel Cousineau at 7:06 AM
Email ThisBlogThis!Share to TwitterShare to FacebookShare to Pinterest