Do not participate in the unfruitful deeds of darkness, but instead even expose them; for it is disgraceful even to speak of the things which are done by them in secret.
Ephesian's 5:11


The corrupt ones have perfected the art of blaming others and never themselves for their criminal negligence and high crimes and misdemeanors.
Their lies ring hollow in Obama's new America where Islam and not the gun are a danger to us as we saw Wednesday in California.
Have you noticed how they always blame everyone and everything but this violent religion that pumps out hundreds and thousand's of murdering, bloodthirsty killers for their god allah and 72 virgins ?

Why haven't any of our leaders called for a critical assessment and end to the evil practices of this dangerous cult ?
Why instead do our criminally negligent leaders keep lying to us, telling us that it is a religion of peace ?


At least in France they have begun to shut down Mosque's of hate and intolerance where Satan has had freedom to preach for decades.

Three days after the Islamic terrorist attack in San Bernadino the Government Media Propaganda Ministry is busy playing the blame game to insulate themselves from any responsibility.
There is no accountability with these criminals with much innocent blood on their hands.


The West has become too stupid to survive

The young Islamic terrorist lady whom the Muslim in the White House scolded us by saying; 'we cowardly American's were afraid of Muslim refugee 'women and children '", is now being blamed for radicalizing her husband.
It was the Department of Homeland Insecurity, the President, Congress and the Senate that failed the American people with their failed vetting process for her and millions of other immigrants from nations that are centers of Islamic terrorism.
Like all Muslims from terrorist supporting countries, she was vetted according to US Government  protocol and allowed easy access into America.


The criminal government will not even arrest Islamic jihad terrorists returning to America after fighting and killing for Islamic State in Syria and Iraq.

The Democrat President F.D.R. rounded up Japanese American civilian's during WW II who were  much less a threat than the followers of Islam jihad allah now openly engaged in their Global Satanic/Islamic war.

That's what they do with other crimes, but with ISLAM they get special terrorist protection that keeps American's in grave danger.

The Crafty One lays the blame 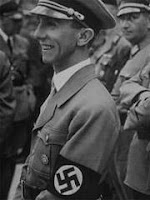 Obama's Saturday morning Goebbels's Propaganda style speech is focused on the gun, while the Islamic terrorist threat to America that Washington has created by it's criminally lax immigration policy is completely ignored!
Yesterday and today It is her husband that the government and media are protecting and turning into a victim. They are doing this because they must protect their American born Muslim who was a good, normal American Muslim that they did not need to watch even though he traveled to Pakistan and to Saudi Arabia twice.
Is this government incompetence or worse ?

If Americans truly realized the threat of Islam, even from American citizen Muslims who eventually obey the tenants of their evil religion and do their jihad duties of killing infidels they might just understand the reason why traitors in our government are flooding America with this growing and very real threat.
The nefarious agenda of Obama and his many Washington criminals and their intentional failure to halt immigration from these ISLAMIC terrorist enabling nations would be exposed as an act of treason and shed the light on these Islamic terrorist enablers withing our own government and media.
This is why the media are ignoring the criminal behavior of our government in failing to arrest and remove these Muslim terrorists and instead ignore them or just watch them and only act after they have attacked American's as we saw Wednesday in San Bernadino.

We are way past the stage of no return when the enemy has infiltrated the White House and the religion of terrorism and the false prophet are given more help than U.S. veteran's and more propaganda protection than the non Muslim American victims.
We have become the prey of Islam's global jihad that our own Government is now assisting here in America which has also helped to create ISIS and weaken Israel for decades.

The U.S.Government has allowed their close partner in crime, Turkey to flood Islamic terrorist recruits from across the world AND AMERICA into Syria by crossing it's borders unhindered for years to join Islamic state. They have only cracked down minimally to try and cover up their agenda while they have flooded Europe and now America with agents of jihad for global Islamic conquest. Something the media will never report on or touch and attacks any who do expose their evil Satanic agenda.
Obama has also made sure that Turkey keeps Islamic State well funded and well armed.
It's not stupidity here, it's their evil plan done in the open with the help of the evil U.S.media who are in on it.
They now admit that they know this attack was in the planning stage for some time, so why did they let them carry out their murderous attack ?
It fits in with their and Obama's plan to disarm law abiding American citizens so that the criminals and Islamic terrorists that they have flooded into our cities can do what they were put there to do, kil and destroy the old America in order to bring in the new totalitarian despotic police state , the Fourth Reich.
__________________________

Why were so many Christian's in Germany silent during the rise of Hitler and his Third Reich ?
For the same reason powerless, fearful, pretend Christian's in America are silent today to the ever growing evil in the White House engulfing the whole earth right now.

How Muslims Treat Each Other

In Memory of Nicholas Thalasinos

hat tip - Shiloh Muse
Posted by Marcel Cousineau at 9:06 AM
Email ThisBlogThis!Share to TwitterShare to FacebookShare to Pinterest

That is because it is only white conservative/ constitutionalist/christian,abortion foes who are the real terrorists!!! As our caliph in chief, would have all of us to believe!! I expect the terror attacks to only increase! All brought to you by the "change you can believe in' crowd !!! This regimes end can't come soon enough!!!

Many are missing why this has come to America and why there is no one who can stop these judgments.

The wicked shall be turned into hell and all the nations that forget God.

We have it coming!

You're on my blogroll.

i do envy you in Beulah land, Batya , you are blessed!
Shine on and keep the fire burning.

The truth out's evil and Israel is in Good Hands, unlike America.

Is it true that the eat goats dingleberrys for breakfest ?

like most American's you have a very short attention span ?

Did you already forget about the Islamic State Muslim terrorist, who cut out the heart/liver of a fellow Muslim and ate it ?

Wake up, they are Confirmed Cannibal's for allah.
How could you forget ?
It was on YouTube before they sanitized the cult of death and made it kosher here in America and in Europe.

Please do not let the EVIL U.S. media brainwash you.

If it was a Christian or Jew who did this the media would still be attacking all Christian's 10 years after, reminding them of the Christian or Jewish cannibal.
BECAUSE IT WAS A MUSLIM, THEY AND YOU HAVE FORGOTTEN ABOUT IT !!!!

You have a government that is betraying you. Probably because of your sins God is sending you the worse people to rule you he can think of.

It is obvious there is NO protection for Americans from the islamic death cult. I read one article where the CIAR is blaming Americans for the massacre!! ( atlas shrugs site ) I remember the Israelis being slaughtered, and then when the Israelis defended themselves the murdering muslims whined to the U.N. about how badly the Jews were treating them!! This insanity is now in America, promoted by the chief jihadist in the oval office and the cadre of muslim brotherhood butchers he has appointed to assist him.

This is what happens to a nation that DEFYS The LORD GOD of Israel. Servants of satan are placed in power over the lazy, flesh serving psudo -Christians, and the pagans too.

Thanks John,
The truth has become very rare in Obama's new America

No doubt about it !

..............and the majority of American's are clueless and dead asleep, like dumb sheep without a Shepherd heading for slaughter.

Talk about a nation/ empire going from BLESSED to cursed.

It not hard to miss unless the person is under God's wrath which comes after He blinds the godless fools of Sodom and Gomorrah America.