Maybe, somehow the U.S. Media will turn this into some sort of victory for their man Obama? 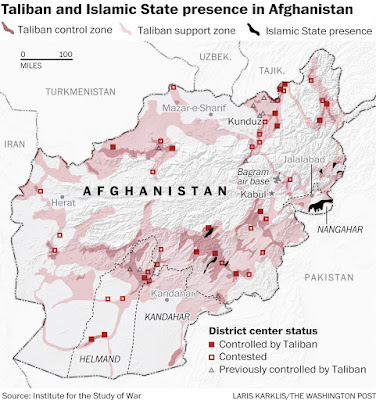 After fourteen years and trillions wasted in Afghanistan and Iraq, the US is beginning to remind me of the old, tired worn out Roman Empire which could no longer keep it together and fell apart.

Our corrupt politicians never went in there to fix or change anything. They have been rendered too stupid to do that. It was just another spending junket with soldiers thrown away as expendable.
What did they fight and die for, the same useless war as Vietnam.

Just look at what they have done to the home front and dwell on the arrogance it takes for these incompetent, power drunk fools to stick their noses into anyone's business.

I'm reminded of President Eisenhower's WARNING speech before he left office and how the greed and corruption of godless power hungry men and women has destroyed America from within.

With their ill advised wars and incompetence, their certain to lose policy, America has become a joke to the nations under the latest corrupt politicians who serve everyone $ but the American people.

The only general to be elected president in the 20th century, he famously warned the nation about the potentially corrupting influence of the "military-industrial complex." This is frequently mischaracterized (?) as a criticism of the arms industry, which it was not. He in fact declared such an industry to be necessary. His concern was of its potential for corruption:


No doubt President Taqiyya Obama's release of many high level Taliban fighters (5 were traded for the deserter and traitor Bowie Berghdahl) from Gitmo has helped his Islamic jihad partners advance there and everywhere else Islam is working to conquer the world for their bloodthirsty god of no mercy and no compassion.
Hussein o., the Destroyer has released many more committed Islamic jihadists to go and fight again...
and most American's are still in denial about whose side he is on.

AMERICAN FREEDOM
Years ago when the US Military seized and burned a shipment of bibles that US soldiers imported into Afghanistan which were meant to free the Afghan people from the totalitarian tyranny of the false religion that has enslaved them to never ending wars, never ending bloodshed and continuous death I knew that the war was lost just as America was lost and doomed to fail and collapse.


Do you think these godless, perverted leaders would ever burn a Koran?
But it was nothing for them to burn Bibles.
That's why America is hopelessly doomed. It's that simple!

The US stopped the importing of truth into an enslaved nation and now imports this religion of death and destruction into America.
Can you see the judgment and end result of this suicidal self destruction of a once great nation ?
While we are in a state of collapse, Secretary of Fairy Tales, John Kerry tells us about the 'great victory', America's success in 2015

State Dept. counts 'bringing peace' to Syria as a 2015 win


Only the US government media propaganda ministry can magically turn a major disaster and destruction of a country into a "win".
Well, Obama and Hillary did it in Libya and got away with it... and they tried to do it in Egypt.

Looking back on the decadent, collapsing Roman empire, the corrupt perverted Roman government has 'Bread and Circus's to keep the population busy and distracted from what was really going on.
Things are no different today during the latest Empire collapse,
with all the latest greed fueled electronic gadgets, sports, the Hollywood-TV-Media-University virus that attacks the brain, the Star-Idol diversions that take people away from seeking God, the dead end booze and drug escapes, etc.
At this late hour of world empire collapse there are more proud fools and useful idiots in deep denial as they walk off the cliff with their CRUMBLING American idol.

I do hope wise heads in Israel are watching their pimps of no peace in Washington closely as they stumble from one major disaster to another, especially after their deal with Iran and have decided to end the farce peace process that Horseface and Obama keep pushing on them ?
After all of this, any Israeli who looks to America for peace instead of God has to be an idiot.

Don't blame God.
The nation has chosen to reject God and the truth and chosen the path to self destruction.

“He makes the nations great, then destroys them;
He enlarges the nations, then leads them away.
“He deprives of intelligence the chiefs of the earth’s people And makes them wander in a pathless waste.
“They grope in darkness with no light, And He makes them stagger like a drunken man.
Job 12

Israel will need to reject the restraints and pressure for more concessions to the exterminate Israel clan and their Palestinian partners, all placed on them by their false god, America Babylon.

Posted by Marcel Cousineau at 8:54 AM
Email ThisBlogThis!Share to TwitterShare to FacebookShare to Pinterest

We haven't won a war in 70 years, another Vietnam type war to depopulate and make corporations rich. We have idiots/puppets running the gov. who are controlled by global elite.

About the same time the nation removed God and replaced Him with the little dumbo-gods that carpet the nation now.

Beautiful article well written. Excellent ref. To job. I may not have alot but I do have his supreme authority book faith and prayer. I would rather be me with faith in Jesus than a billionaire who knows not God.

Amen, well said.
Sounds like you KNOW the Word of God and believe it.

It's all temporary, the junk here on earth that so many souls waste their lives acquiring.
What a waste!

Praise God for the power He's given us and only accessible by faith in Messiah Jesus who is very much alive and still Jewish.

Excellent article I liked the way you inserted qouted job. I would rather be me with my faith in Jesus and the suprene authority book in my right hand . Than a lost billionaire. Lord Jesus help your sheep make it through the dark days ahead.

Amen! I am in agreement with you. The true riches are found in MESSIAH JESUS.

Babylon America has chosen to challenge The LORD GOD of Israel. They are already loosing big time, and will soon be no more, including the servants of satan who are pretending to be its leaders.

Thanks and Amen to both of you,this here is all so temporary and to ignore God and eternity and settle for lies is truly the worst decision any person can make.

It's a blessing be working in the Lords vineyard to get the word out and expose the deception.
Ephesians 5:11