Time Has Run Out For America Babylon


“Those [destined] for death, to death;
Those for the sword, to the sword;
Those for famine, to famine;
Those for captivity, to captivity.”’ 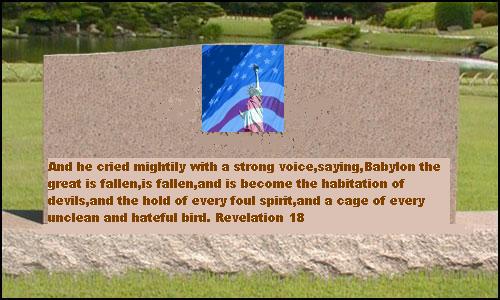 "With each provocation, North Korea jeopardizes stability in Northeast Asia and poses a growing threat to our allies and the U.S. homeland,"

But Yonhap also reported on March 13 that SEAL Team 6 was training alongside South Korea's version of the SEALs for "incapacitating" North Korea's leader, Kim Jong Un.

Russia Says U.S. Missile Strike on Syria Was a Threat to Its Forces

"Such steps are forcing us to take extra measures to ensure the safety of Russian forces." He did not specify what those measures were.

North Korea claims the deployment of 1250 US Marines in Darwin is proof US is preparing for nuclear war
"This is the largest scale US military presence in Australia after World War 2," the newspaper said.


Is God Going To ‘Bless’ A Government That Gives $500 Million A Year To Fund Planned Parenthood’s Abortion Holocaust?


Michael Snyder on A MINUTE TO MIDNIGHT


Tony in New Zealand informs us on the secret meeting there of the Five Eyes.
I believe this has to do with their upcoming war plans to finally stop North Korea, and other hot spots (a little too late).
With the coming WW III "fallout", the globalist elites plan to bring chaos in order to implement their endgame NWO is in play.

I wonder if some of the subjects covered are Global Depopulation and their new international currency, the Mark of the Beast ?


If you missed it, I  mentioned this secret meeting the other day with FBI Director James Comey flying in.

Something the Stalinist, lying, fake-news US  media  has covered up


Posted by Marcel Cousineau at 9:33 AM
Email ThisBlogThis!Share to TwitterShare to FacebookShare to Pinterest

Marcel,
I am in complete agreement with Nathan's article. It is obvious that the evangelical church system has been fooled again. It's an easy job to trick them! Just focus on mammon and materialism, and they will take the bait every time. Also, making the idol of America great again! Why can't they hear The LORD+?

Because they DO NOT LISTEN TO HIM+ nor care what HE+ says!

I remember a message I read a few months back before the election. It involved a short conversation between an on duty Secret Service agent and an office receptionist. The agent took his assigned position near the receptionists desk. In the ensuing conversation the agent stated that Trump had been picked three years ago to be president. The agent also said that as he was single he was putting in for a transfer to an overseas position anywhere.

I don't know the veracity of this story, but the lady reporting it had nothing to gain by making it known. We are seeing some very strange and frightening things take place. It seems that the program that was feared under criminal Hillary is continuing right on schedule under Mr. T. Prophecy is being fulfilled on a daily basis.
Watching and praying over here. Samson7able <(((><


They listen to their corrupted hearts and corrupted by mammon Trump has their hearts lock stock and barrel.

Jesus warned us about these great days of deception.

The lady you're referring to is, I believe, Joanie Stahl who regularly appears on aminutetomidnite.com She is apparently in a position to come into contact with people of position and she regularly hears information and shares it on their youtube program.

I completely agree with Nathan as well, and unlike some in the position of watchmen, I believe him to be 100% trustworthy.

Blessings and peace. God bless you.

""It is obvious that the evangelical church system has been fooled again. It's an easy job to trick them! Just focus on mammon and materialism, and they will take the bait every time."

Going all the way back to 'BORN AGAIN' Jimmy 'the Con' Carter.

The doubleminded went to politics for their salvation and when they cry out to god He will tell them to run to their false god.

It seems America has chosen which side she is on. Therefore, our righteous holy God has no choice but to exact judgment upon her. Even those in the churches these days - you know the ones - prosperity gospel, saved by grace, continue as you wish churches - truth, repentance and judgment are not taught. People love to 'hear a new thing' and love to hear how wonderful they are - so wonderful, in fact, that they will just fly away.

Well said 'so wonderful they will just fly away'


“Therefore I will scatter you like drifting straw
[Driven away] by the desert wind.
25
“This is your destiny, the portion [of judgment] measured to you
From Me,” says the Lord,
“Because you have forgotten Me
And trusted in [pagan] lies [the counterfeit gods, and the pretense of alliance].”
Jeremiah 13

They are saying the same things Israel said to Jeremiah.
No way, NEVER, it can't happen to our very high on a pedestal, America.
(pride blinds them to the serious danger America is in right now.

Their latest false hope Trump will not save those who look to him instead of Jesus alone.

Exactly. Israel thought they were home free. They thought that God resided in their temple so they would never face hardships and judgment. They were wrong. So is America.

There is so much that repeats on this earth related to God and His word. Stubborn man never learns.

As Samson wrote, they really do not believe God, His word until it's too late.