Palestinian's Roll Out the Red for V.P. Biden in Israel

US tourist killed and several wounded in Israel attacks


It's no coincidence that an America tourist was killed not far from where Joe was peddling America's phony peace scam to Israel.

We hear Joe condemning the Palestinian murderers but actions and words never line up with Washington.
The Palestinian's are never held accountable with Obama or anyone, especially the EU. and UN who are always selling us lies and victim-hood about serial killers for allah, the Palestinian Muslims.

The EVIL US Policy of always rewarding the Palestinian's bad behavior is responsible for the violence!


It's past time to stop rewarding the Palestinian's and to punish them severely.

With the Palestinian's it's all jihad against Israel all the time with no real desire for peace and this is why the Palestinians must be defeated and destroyed.

Israel and America's policy of rewarding them is killing Israel, slice by slice. piece by piece. 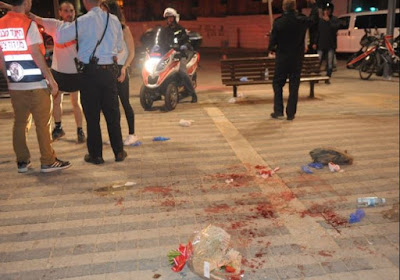 The evidence today in Israel exposes the lie that is America's 2 state final solution where the Palestinian murderers are always rewarded for killing Jews.

An American, killed in quiet, touristy, idyllic and peaceful Jaffa by a Palestinian under the influence of Islam, the religion that lying Joe and his lying boss, Obama tell us is a religion of peace.


Israel suffers because they chose to ignore God and raise their skirts to their American idol whom they follow and serve instead of Him.

Israel will continue to pay the price for disobedience, no peace is possible with the cult of death. Their defeat is the only answer.
When they learn to fear Israel, this will end.
Right now Israel is a joke due to the really stupid clowns in leadership.

The Palestinians see Jews as easy targets to kill and have no fear, thanks to a weak, appeasing, spineless Israeli government which always retreats and rewards the Palestinians.

32 You shall make no covenant with them or with their gods.

33 They shall not live in your land, because they will make you sin against Me; for if you serve their gods, it will surely be a snare to you.”;

Posted by Marcel Cousineau at 5:12 PM
Email ThisBlogThis!Share to TwitterShare to FacebookShare to Pinterest