Where it used to take a day or less for the Oligarchy to send out their media attack dogs and destroy someone, everything they've tried to do to destroy Trump has failed.
So now they resort to violence and send out their brown shirts, the university brainwashed youth who have been turned into robots of the corrupt destroyer class now infesting Washington.

'And in that day will I make Jerusalem a burdensome stone for all people: all that burden themselves with it shall be cut in pieces'

The cutting in pieces has increased in intensity here in Obama's changed forever America.
This country is now hopelessly divided because we forgot God and assumed to carve up His land ISRAEL to His enemies.
Suicidal America, left and right is now entering the jaws of hell. 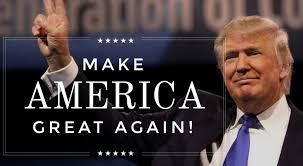 A lawless and reprobate nation in deep rebellion against God and His commandments can never be great again. Those who are caught up in this delusion are headed for trouble just as the godless left are.


We've seen it in far away places like Cambodia, Russia, Cuba and always thought we were above it all. We are not.
What we are witnessing now in the US is the start of the violent and bloody revolution of the godless left.
I find it interesting that this began in Chicago, the hometown of the the one personally indoctrinated by Communist revolutionary, Frank Marshall Davis, (President for life ?) Barak Hussein Obama.

When their agenda is threatened they always resort to violence.

They've already mastered the propaganda war of lies as their leader in the White House has proven beyond any doubt.
When there is a choice to be made between the good and bad, they always gravitate to bad because that is their nature.

It's no surprise to me that Bernie, the godless revolutionary went to the Soviet Union on his honeymoon and made sure to visit his fellow revolutionaries in Cuba and Nicaragua.

This is why Obama is so fond of Cuba and it's dictators for life, he wants to learn how it's done.
The angry young minds brainwashed by the Marxism indoctrinating universities of America, whose hopes have been destroyed by Obama's economic policies are leading the violent charge against the right. 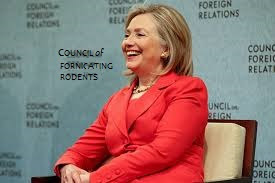 Bernie's fellow radical's, Hillary and Obama along with the establishment phony Republicans zero in on Donald Trump for feeding the violence when it is they who created it just like the Communists before them did.

We can see how they play this game by always rewarding Palestinian violence and making excuses for it, never once holding their darling Islamic terrorists accountable.
The masters of propaganda are experts at the crafty lies as they send their minions to attack free speech that does not comport with their radical revolutionary ways. .. and then they blame the victims of their violence much like they do with Israel and the Palestinians who have long used violence and intimidation to get their way.

These are birds of the same feather with the same play book and this is why they always defend Islam and it's violence, going so far to lie and tell us it is a religion of peace.
Right now, there are many, many Muslims involved with the left (Democrats) in this war against Trump who they see as an enemy because he told the truth.
The US media will cover this fact up as they are the mouthpiece of this revolution of division and darkness.

There is something wrong with the religion of ISLAM with its global jihad, violence and drive to conquer the world for their god and Trump only wants to sanely and sensibly put a temporary stop to the Islamic invasion of America TO PROTECT THE AMERICAN PEOPLE.
Hillary, Bernie and the rest of the godless left are against this because they want to see chaos, revolution and destruction in the streets of America and blame it on the right.

Look what the Democrats, Hillary and Obama brought to Libya with their agenda.
They're not stupid, but they are masters of chaos.

The god they serve is Satan


That is why they are always dead silent, covering up the daily global violence of Islam and go out of their way to attack Trump on the violence subject.
Hillary has been in the same bed playing with matches with these violent, bloodthirsty Muslim for decades.
How much longer can she and the perverts on the left get away with defending evil ?
God knows !

That the media and other enemies of the truth are blaming Trump for the violence is the same strategy that Obama and his fellow Democrats have been using against Israel, blaming them for the violence while ALWAYS giving the violent, murdering and bloodthirsty Palestinians a pass and billions of dollars over time for their work to overthrow Israel.

Obama, Hillary and Bernie are long time devotee's of the radical revolutionary Saul Alinski and their bible, Rules for Radicals, is their play book.
It should be evident to everyone why they blame others and never themselves for anything.

Just last week the Liar in Chief, Obama pointed the finger of blame away from himself on to Prime Minister James Cameron and the UK for handing over Libya to violence loving ISLAMIC TERRORIST and followers of the false prophet. 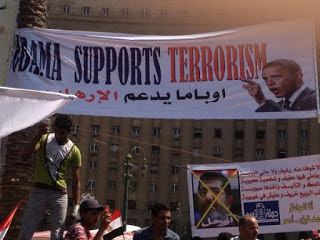 Obama alone is guilty on Libya  just the same radical Islamic overthrow he tried to do to Egypt but failed to do. But the destroyer Obama is still working on it in Syria.
Imagine who would control Syria now if Russia's Putin had not stepped in.

The masters of intimidation and lies have declared war on Donald Trump because he opened his mouth about the violence that is problematic with the religion of Islam.

The wicked, godless Democrats hate the truth as much as they hate God.
We see this by how their leader championed Muslim Brotherhood terrorist Mohamed Morsi in his short and violent rule over Egypt where Coptic Christian's were the victims.
It's not possible to avoid the judgment that God is bringing on gay America. He's going to turn happiness into sorrow, gay into misery, civil into civil war, a working government republic into a corrupt bastion of totalitarian evil and destruction, peace into war in the streets.

All we can do is repent, pray and seek God's mercy and forgiveness as these are the days Jesus warned us would come before His return.

Posted by Marcel Cousineau at 7:56 AM
Email ThisBlogThis!Share to TwitterShare to FacebookShare to Pinterest

Daniel 2:21 He removes Kings and raises up Kings, He gives wisdom to he wise and knowledge to those who have understanding.

Daniel 2:18 ...so that they might seek mercies from the God of heaven. (Why did Daniel feel confident praying for God's help? Because he knew that prayer to an omniscient God was the first step in a crisis situation.)

well said... but we are way beyond crisis.

We agree that it was God who gave America the reprobate Obama to lead America to Psalms 9:17 ?

Even Daniel had this understanding when he interpreted Belshazzar's dream;
'You have been weighed in the balance and found wanting' (lacking)

We are beyond lacking, poisoning the earth with what even the Babylonian's didn't do. homosexual marriages, the baby killing empire, hammer of the whole earth will be hammered, there is no way around the judgments of a just and merciful God whose warnings have all been ignored while His people (majority) chase after worthless idols.

Just as God told Jeremiah (who was inclined to pray) to stop praying for the people more than once.

America has passed the point of no return and to think otherwise is to not understand the times.
This ignorance will lead many Christian's into deception and away from trusting in God alone for what is coming that no one not even hubris Trump or false Messiah Cruz can stop.