Rapidly Running Out of Time

And if those days [of tribulation] had not been cut short, no human life would be saved; but for the sake of the elect (God’s chosen ones) those days will be shortened.


Lets say that a few dozen of these 3,800 to 7,600 miles per hour  missiles are launched from the North/Arctic, West/Pacific and East/Atlantic, all at once by Russia and China at the same time.

How much time does that give the people of Sodom & Gomorrah America to even say their last prayer ?


Everything seems to be moving faster to the appointed hour

Hypersonic missiles are under rapid development in China and Russia as a way to penetrate advanced air and missile defenses such as those developed by the Army and Navy. A major problem for current U.S. missile defenses is that all were designed from the ground up to target missiles with predictable and unchanging trajectories.

China’s DF-ZF hypersonic glide vehicle has been tested at least seven times, and Russia’s Yu-71 hypersonic strike weapon also has been tested several times. The gliders are launched atop ballistic missiles and travel along the edge of the atmosphere at speeds from Mach 5 to Mach 10 — 3,800 to 7,600 miles per hour.

More troubling for the United States, the deal is an indication that the UAE—a long-time U.S. ally—is drifting into Moscow’s orbit.

Mr. Fiddler made the wrong decisions in life and now he will have eternity to dwell on the evil choice he made that got him where he is now 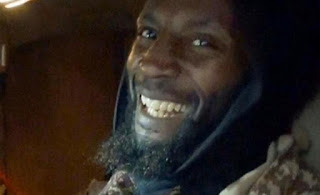 The suicide bomber identified as Abu-Zakariya al-Britani by the Islamic State as being responsible for a blast at a Mosul army base this week was confirmed by family members as being British-born Ronald Fiddler, who later changed his name to Jamal al-Harith before becoming al-Britani. Al-Britani was picked up by the United States in 2002 and held at Guantanamo Bay until 2004, when he released to the United Kingdom. Photo by Sky News.

This was Ronald Fiddler last smile before he went off into an eternity of hell where he will be too busy gnashing his teeth to smile, ever again.

The Son of Man will send out His angels, and they will gather out of His kingdom all things that offend [those things by which people are led into sin], and all who practice evil [leading others into sin], 42 and will throw them into the furnace of fire; in that place there will be weeping [over sorrow and pain] and grinding  gnashing of teeth [over distress and anger].

Posted by Marcel Cousineau at 12:23 PM
Email ThisBlogThis!Share to TwitterShare to FacebookShare to Pinterest