Secretary Kerry, What Exactly is a Partial Truce ?

US, EU, UN, Russia unable to patch up Syria 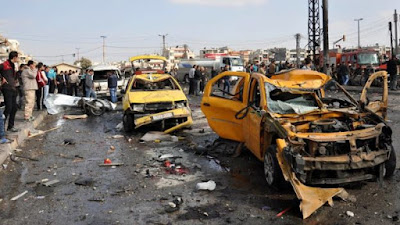 Ongoing Muslim on Muslim death and destruction in Syria

You have to admit, they are good about sharing this one thing, death, with each other.

Obama always seems to leave out this one great contribution of his religion to the world.

"Meanwhile US Secretary of State John Kerry has said a "provisional agreement" has been reached with Russia on a partial truce in the conflict."

Provisional - arranged or existing for the present, possibly to be changed later.

It looks like the Syria partial truce agreement is not worth the paper it's printed on, much like the worthless and diabolical 2 state, counterfeit peace process, designed and targeted to shrink Israel to unsustainable borders, which the US has been working on for many decades now.


It should be noted by everyone on this earth, especially Israel, the end results of Empire America's long, long, long and very, very, very expensive adventures in Afghanistan and Iraq and how well they have paid off for everyone involved.

The Empire can't seem to get anything right anywhere, even back home where the citizens are unhappy with the Clowns and the Big Top Circus in Washington.

It's tough being a large, corrupt empire, hijacked by the greedy and godless globalists, especially when lying is the only real currency of said dying empire.

US-backed militia groups now fighting each other in Syria

Another question I have is;

ISRAEL, Why are you listening to the Clowns, why, why, why ?


The truth shall set you free !
Posted by Marcel Cousineau at 7:52 AM
Email ThisBlogThis!Share to TwitterShare to FacebookShare to Pinterest